Winter reflections of Bewick’s Swans in the UK

As the festive season is upon us, we are still waiting for our annual ‘swan-fall’ here in the UK. On one or two days every winter, we are treated to the mass arrival of Bewick’s Swans from the Russian arctic, usually pushed in our direction by persistent north-easterly winds and plummeting temperatures. However, this winter has painted a different and rather unusual picture so far. Only 147 Bewick’s (including five cygnets) were recorded on the Ouse Washes on 12 December (WWT/RSPB). With numbers averaging around 75 daily at Slimbridge, there are likely to be fewer than 300 in the whole of the UK at a time when we might expect to see one or two thousand. 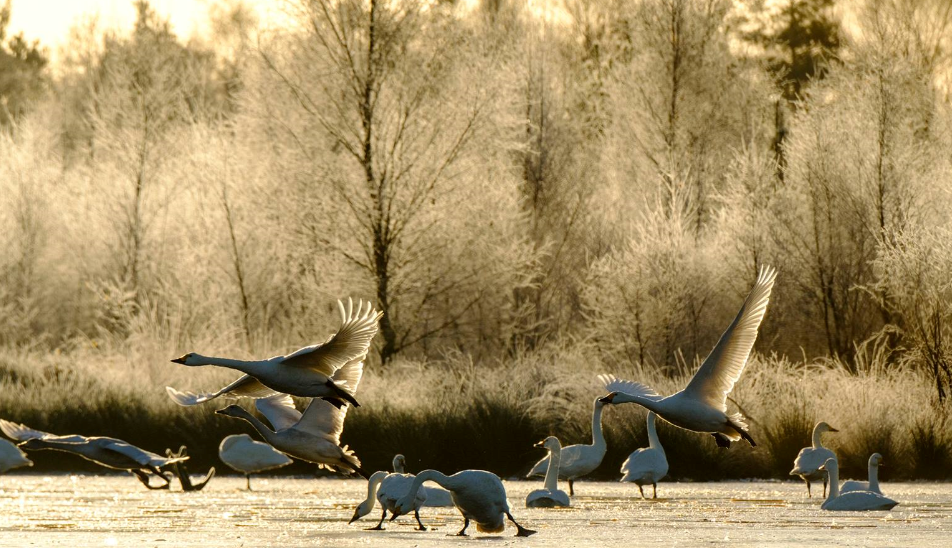 The recent cold snap in the UK has not been mirrored on the continent and therefore many Bewick’s remain further east. You might be wondering whether the swans are congregating in the Netherlands as they usually do at this time of year, but Dutch ornithologist Wim Tijsen sent us this news:

It seems that the majority of the swans are even further east, and this morning we received news from Hans-Joachim that 1,027 Bewick’s had arrived in Schleswig-Holstein in Germany, double the number that were recorded there in the previous year. There are likely to be more in other parts of the country and also in the Baltic countries.

Among those currently in Germany not yet persuaded to make the onwards journey, is our transmitter swan Maisie who usually spends the winter at Slimbridge. We were very excited to hear that Hans-Joachim managed to track her down in the field! He sends us this report:

“The Bewick’s Swan Maisie which is carrying a transmitter installed by the Wildfowl and Wetlands Trust is back with us. Since 21 November 2017 she has been transmitting from Fahrenhorst on the Upper Alster, either from a maize field southwest of Fahrenhorst or, less often, to the northwest from green pasture by the Upper Alster in the nature reserve. On 27 November, I went to look for her and found her at 11 am on the maize field mentioned above – together with five adult Bewick’s and 24 Whooper Swans. At first, she was hidden behind an excavator, but then could all the same be identified by her white neckband with no inscription. She sat for at least a half hour on the ground and occasionally stretched her neck upwards, but her leg ring could not be seen; she looked well nourished.”

Only time will tell if Maisie decides to venture back to Slimbridge again this year…..