In August 2017, a team made up of staff from WWT and University College London (UCL) joined Russian colleagues on an expedition to the Russian tundra to catch and colour-ring Bewick’s Swans. This work forms part of WWT’s long-term study of the species, with re-sightings of ringed swans enabling researchers to gain further information on the movements, site fidelity, breeding success and survival of individual birds.

Over nine days, the team travelled by boat to areas frequented by Bewick’s Swans, specifically targeting non-breeding pairs and flocks. In total, 86 Bewick’s Swans were captured and colour-marked with yellow and white leg rings. Each bird also had various body size measurements taken to assess its health and condition. A smaller number of Whooper and Mute Swans were also ringed; however, unlike the Bewick’s Swans these birds will not migrate to the UK but will likely migrate to the Baltic States, the Netherlands and Germany. 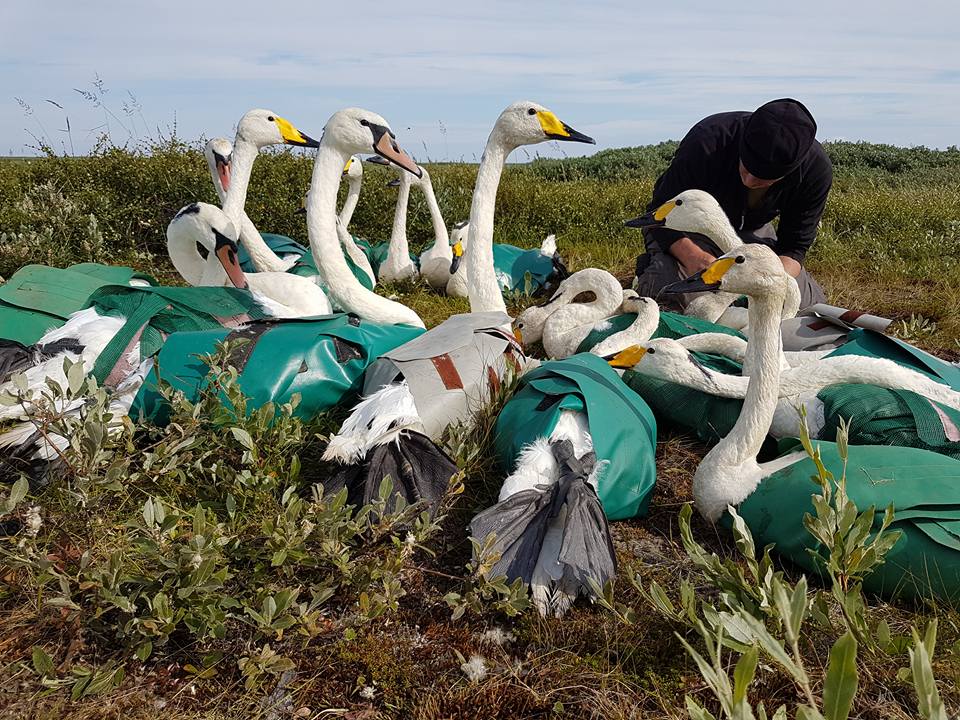 The expedition would not have been possible without the help and active participation of Russian colleagues from the Nenetskiy Nature Reserve, who have been protecting this important breeding and moulting area for the swans and many other waterbird species since the area was designated as a National Nature Reserve (known as a “zapovednik”) by the Russian Government in 1997.

Back in the UK, the Bewick’s Swan is becoming an increasingly difficult species to catch: cannon-netting attempts on Ouse and Nene Washes during the winter of 2017/18 failed to catch any birds. However, a swan pipe catch at WWT Slimbridge in January 2018 caught ten birds which were all ringed and screen by X-ray to check for embedded shot, an indication of illegal hunting (see here for further info).

The winter catching of the Icelandic Whooper Swans in the UK is somewhat a little easier. Three swan pipe catches took place at WWT Welney in Norfolk, WWT Martin Mere in Lancashire and WWT Caerlaverock in Dumfriesshire. In total 134 Whoopers were caught which included 95 newly ringed birds and 39 previously caught birds.

WWT’s Monitoring Unit, have been kept busy over the winter, processing thousands of re-sightings of colour-marked birds, most notably those of Whooper Swans. During winter 2017/18, 5,750 ring sightings of 473 individual Whoopers were reported to us. These sightings were added to the ever increasing sightings database, which now holds an incredible 951,709 records, with the first record from 1985.

Whilst we are used to entering sightings of Whooper Swans from their usual winter haunts in the UK, we were surprised to receive sightings of three Icelandic ringed Whoopers (Orange ZTB, ZTD and ZTF) from the Netherlands. The family unit consisted of a parent (ZTB) and two cygnets from the 2015 breeding season which appear to have spent the winter together in the Friesland area.

Thanks to all who have contributed colour-mark sightings during the winter period. If you happen to have any sightings that await submitting, we would be grateful if you could send your sightings to us at colourmarkedwildfowl@wwt.org.uk