Studying aggression between swans and other waterbirds using a webcam

Within waterbird assemblages, swans are well-known for showing aggression towards other waterbirds, including other swans (Figure 1). These aggressive behaviours have led to some concerns about their potential impacts on other waterbirds. Yet, there is surprisingly little field data available to tell us which species swans interact aggressively with and how frequently such interactions occur. To address this knowledge gap, we recently published an open-access paper that casts new light on aggression amongst swans and waterbirds. 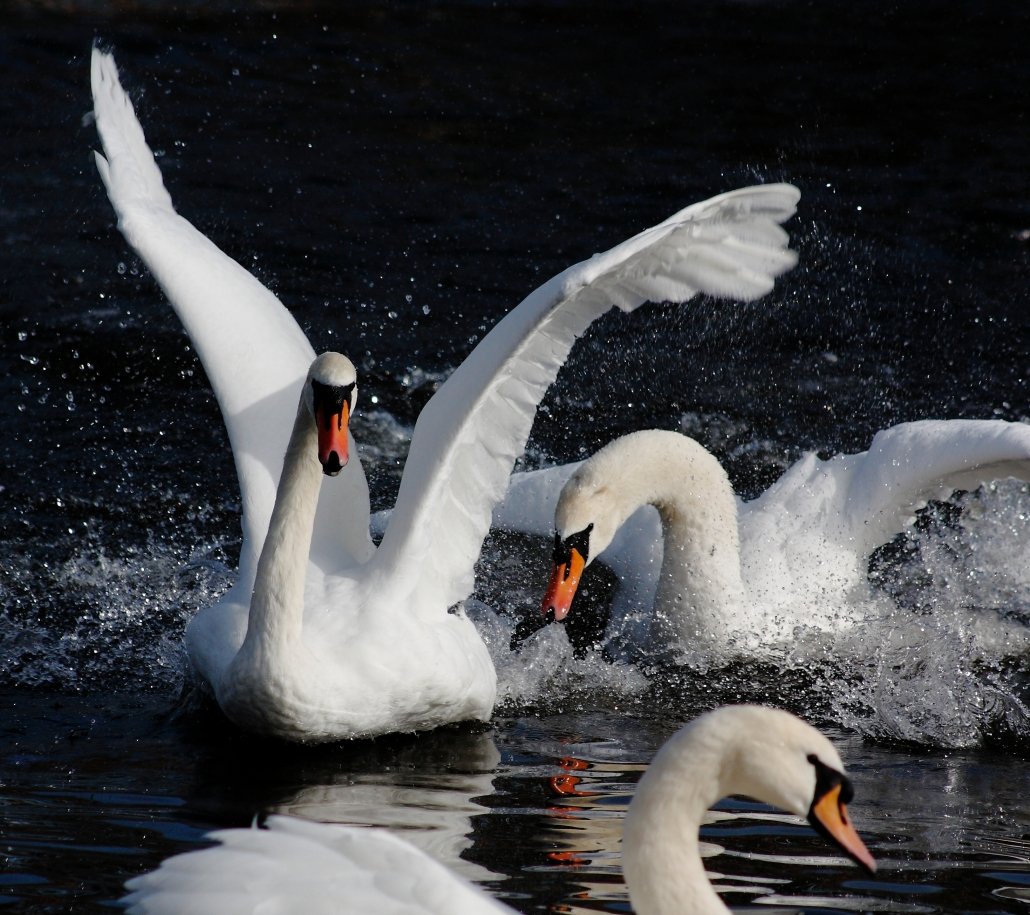 To provide this much-needed evidence, we used the live-streaming webcams at WWT Slimbridge (SW England) and WWT Caerlaverock (SW Scotland) to undertake behavioural observations of aggression to/from swans and other waterbirds in winters 2018/2019 and 2019/2020. Both Bewick’s Swans (Cygnus columbianus bewickii) and Mute Swans (Cygnus olor) were present at Slimbridge, while Mute Swans and Whooper Swans (Cygnus cygnus) occurred at Caerlaverock. We used all occurrence sampling to identify all of the aggressive interactions between conspecific or heterospecifics individuals, and 10-minute focal observations to record the total time spent by swans specifically on aggressive interactions with other swans. Our aim was to compare whether the proportion of intraspecific aggressive interactions of each species differed from parity (i.e. 0.5, which would have represented equal numbers of intraspecific and interspecific interactions for a species). We also used zero-inflated generalized linear mixed effects models (ZIGLMMs) to assess between-individual variation in the total time spent by swans on aggressive interactions with other swans.

While the majority of swan aggression was directed towards, and received from, other swans, we also observed some aggression by the three swan species towards 9 of the 11 smaller waterbird species: Canada Geese (Branta canadensis), Common Moorhen (Gallinula chloropus), Eurasian Coot (Fulica atra), Eurasian Teal (Anas crecca), Greylag Geese (Anser anser), gull species (Larus spp.), Northern Mallard (Anas platyrhynchos), Northern Pintail (Anas acuta), and Tufted Duck (Aythya fuligula). All of these species, with the sole exception of the gulls, were also recorded giving aggression towards at least one of the swan species.

Whilst swans do exhibit some aggression towards smaller waterbirds, the majority of aggression by swans is directed towards other swans. Aggression focused on conspecifics likely reflects greater overlap in resource use, and hence higher potential for competition, between individuals of the same species.

Our study provides an example of how behaviour can be studied using data collected remotely via live-streaming webcams. Such remote data collection offers several advantages to swan researchers, including less disturbance to the birds (once the camera has been installed), lower environmental costs (i.e. carbon footprint) due to not having to undertake visits to and from study sites, greater accessibility of research to scientists who cannot physically travel to study sites (e.g. due to logistical difficulties or disability), and the facilitation of citizen science programmes. Given these advantages, we expect that remote data collection methods will become increasingly popular with researchers, especially with Covid-19 currently limiting opportunities to visit study sites in person.

The full article can be found here.