The effectiveness of a network of small protected areas for the conservation of wetland birds: lessons from a 30-year experience in Trentino, Italy

The main purpose of many protected areas (PAs) is the long-term preservation of biodiversity and ecosystems. In Europe, several PAs have been established to protect wetlands, which are a key habitat for biodiversity and ecosystem services, but have undergone dramatic destruction and degradation. Because of drainage, reclamation and conversion, many wetlands now occur as habitat remnants, and are often protected by PA networks. However, the effectiveness of such networks in conserving biodiversity had been rarely assessed.

In our, work, we have evaluated the effectiveness of a system of PAs comprising 26 small wetlands for the conservation of wetland birds over three decades. We investigated the changes in species’ occurrence in the period (1989–2019) within the wetlands of the network, and related it to the species’ degree of ecological specialization. 10 out of 23 species increased their occurrence rate, seven remained stable and six declined. The number of habitats that a species use was a predictor of the occurrence trend: species relying on one or a few habitats (i.e. specialized species) declined, whereas the generalists ones, i.e. those using a plurality of habitats, increased. Several species that are rather common in most of their European range increased, e.g. mallard Anas platyrhynchos, grey heron Ardea cinerea, coot Fulica atra and moorhen Gallinula chloropus. Less common species that also underwent an increase in their occurrence rate were black kite Milvus migrans and common sandpiper Actitis hypoleucos. The species with declining trend in occurrence rate were species with an unfavourable conservation status in Italy (two bad, three inadequate, one unkwnon). Even more relevant, they were mostly species with more specialized habitat requirements within the study region, such as water rail Rallus aquaticus, great reed warbler Acrocephalus arundinaceus and reed bunting Emberiza schoeniclus. Mute swan Cygnus olor appeared stable. 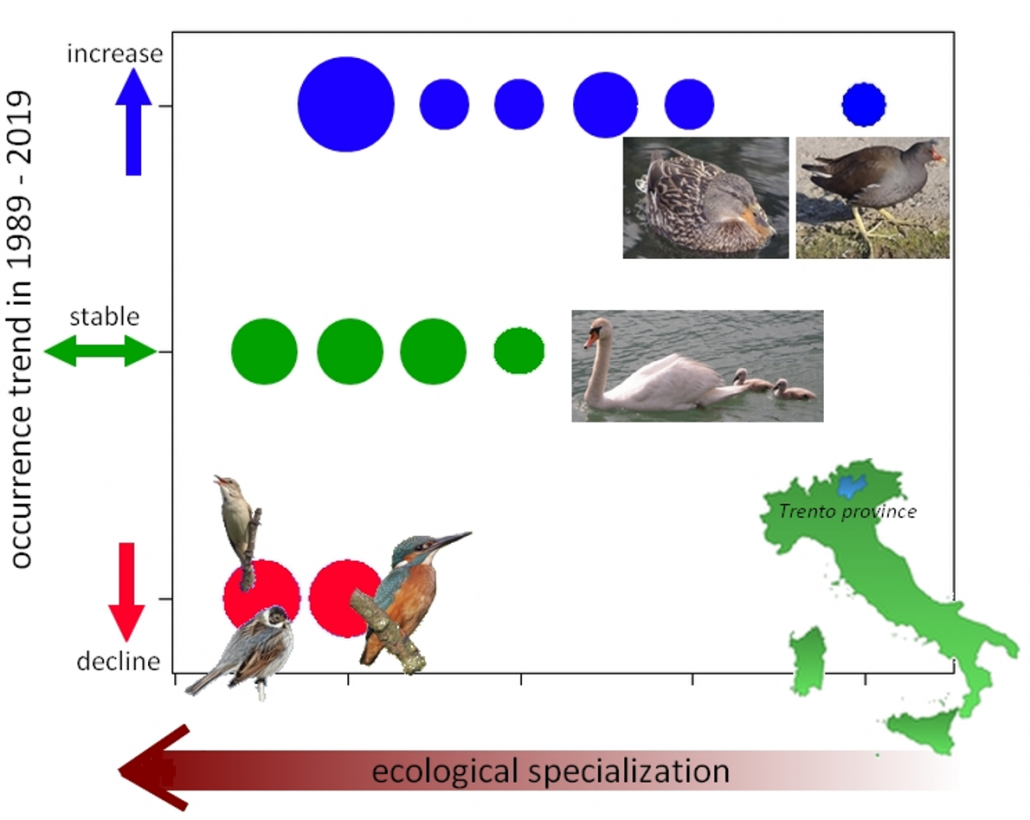 The results of our assessment of the effectiveness of 30 years of wetland conservation, by means of a strategy that ensured their preservation from drainage and conversion, but did not include bird-oriented management and interventions to mitigate the increased isolation of wetland sites, suggest that such a strategy proved to be effective for generalist species, whereas it was not enough to preserve the more specialized species. Flooded reedbeds and other related habitats (such as extent dominated by Carex or Typha spp.) have been largely destroyed outside the PAs, and are often experiencing degradation or evolution into other habitats also within the PAs. The species tied to such habitats were in fact the worst performing ones, and some of them have already disappeared from the study region.

In conclusion, the proper management of crucial habitats, such as flooded reedbeds and other wetland vegetation types, as well as the mitigation of the strong ecological isolation experienced by many wetlands, which are too small to host viable populations of many species, are key points for the conservation of wetland birds, and in particular for the more specialized species.

How will overwintering swans respond to changing food availability and comp...