A tribute to Harry Lumsden 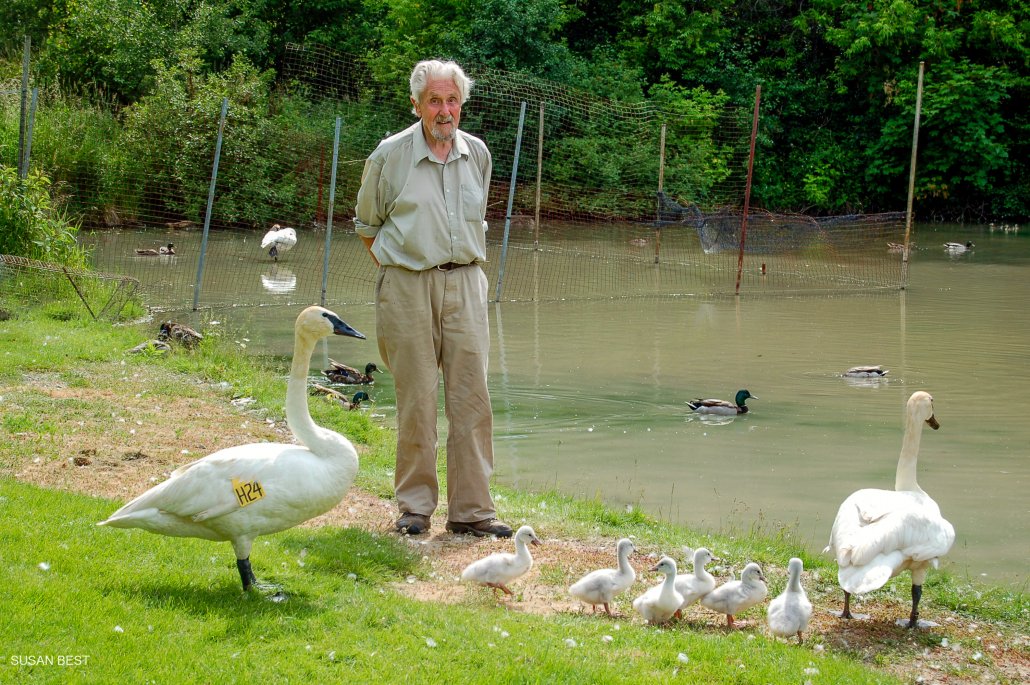 It is with great sadness that we share that Harry G. Lumsden, our Visionary and Mentor of the Ontario Trumpeter Swan Restoration Program passed away peacefully at home on Feb 8, 2022, one month shy of his 99th birthday. Over the years, we have had the honour to stand beside this modest man who only ever wanted to draw the attention to the swans rather than himself. Harry shared with us his dream, his knowledge, and his passion of Trumpeter Swans. It is because of his vision we must give credit for the beauty of the Trumpeter Swans we see today in Ontario. Harry Lumsden was a man of great accomplishments and a life well lived, full of legacies, respected worldwide for his work in rehabilitating the Trumpeter Swan population in Ontario, a self-taught biologist/ornithologist and “a life-long student of birds.” Harry had often shared a story of childhood when he first became interested in birds, “I have always been interested in birds right from being a small child. I remember fairly vividly when I was about 4 years old, being taken by my father to look at a Song Thrush nest. The bird was flying around making alarm calls.” From then on, Harry’s curiosity became enamored by the mysterious behaviour of the birds.

Harry modest lifetime passion for birds did not go unnoticed. On October 30, 2003, Harry received The Order of Canada Award, and in 2004 he became a Member of the Order of Canada, one of the highest honours for his outstanding contribution to wildlife management and conservation.

“He provides a strong example of how, by working together, we can make a lasting contribution to conservation. A retired biologist and research scientist with Ontario’s Ministry of Natural Resources, Harry Lumsden is an international authority on the grouse family and waterfowl. As well, he has shared his knowledge of aviculture with the general public. He has inspired volunteers to follow his lead in breeding Canada geese and Trumpeter Swans, successfully reintroducing these birds to Ontario. Known for his passion and dedication, he continues to stimulate public interest in wildlife conservation.”

The Lieutenant Governor’s Ontario Heritage Award for Lifetime Achievement was awarded to Harry Lumsden on February 24, 2012, for his work with the Trumpeter Swans. “This prestigious award honors individuals who have made contributions to preserving, protecting and promoting community heritage for 25 years or more.”

Many prestigious awards are hanging on Harry’s walls. He would humbly smile and comment during an interview, “Please don’t say anything about that stuff, I don’t want to give the impression that I am more than I actually am. I just love swans.”

Harry, you were more than you ever wanted to take credit for. A humble and gentle man who did remarkable things in your lifetime. May you rest peacefully and fly high with the beauty of your legacy that now grace the skies throughout Ontario, your beloved Trumpeter Swans. It has been an honour to know you.

Harry was born in Scotland and came to Canada during World War II after he joined the Royal Air Force. Like other British pilots, he was stationed in Canada on a three-year tour of duty in Alberta, Saskatchewan, Ontario, and Nova Scotia. During a one-week vacation from his tour he had the opportunity to meet with the staff at the Royal Ontario Museum. Here his keen interest to learn about bird studies and skin preparation catapulted him into the rest of his career. Following the war, he immigrated to Canada and joined the Ontario Department of Lands and Forests to continue his work with birds. For the next 35 years he conducted waterfowl surveys over the Hudson Bay and James Bay region with the Canadian Wildlife Service and the U.S. Fish and Wildlife Service. In 1982, Harry’s work began on a recovery program in Ontario for the endangered Trumpeter Swan. After Harry’s career headed into retirement the Ontario Trumpeter Swan Restoration Program became his primary focus. Together with the aid of private funding and a group of dedicated volunteers the Trumpeter Swan population was estimated in 2007 at 1000 birds and was classified as a re-established self-sustaining population in Ontario. Today the Trumpeter Swan Population in Ontario is 2500+ swans. Harry’s knowledge was self taught by that of a hands-on curiosity to learn everything he could about a broad species of birds. Over his lifetime, he has authored over 100+ publications and a co-author on 50+ others. His life’s work has made Harry G. Lumsden respected throughout the world for his ornithological accomplishments.

Harry is survived by his three daughters, Jennifer, Deborah and Diana and three grandchildren, Chris, Heather and Jake.

If you would like to make donations in Harry Lumsden’s  memory, please choose a charity of your choice