While modern conservation biology has produced great success stories of restored species and ecosystem functions, rapid recovery of one species may cause unintended conservation consequences via complex interspecific interactions.

This has occasionally triggered situations, in which a locally increasing, protected species heightens the vulnerability of threatened co-occurring species, often due to anthropogenic-driven changes in the environment. We examined whether the recovery of a flagship species, the whooper swan (Cygnus cygnus), and the spreading of the non-native Canada goose (Branta canadensis), cause asymmetric competition with other sympatric waterbirds at their breeding sites in Finland, as there is a great controversy in the population trends of these large herbivorous waterfowl compared to smaller waterbirds. In Finland, pair numbers of the whooper swan increased from 15 in the 1940s to 9 000–12 000 in the 2010s, and the species’ range now covers the entire country. The population growth of the Canada goose in Finland was low until recent decades, when the population increased rapidly from 300–500 pairs in the late 1980s to 4 900–6 300 pairs in the 2010s, with population growth strongest in southern and central parts of the country. 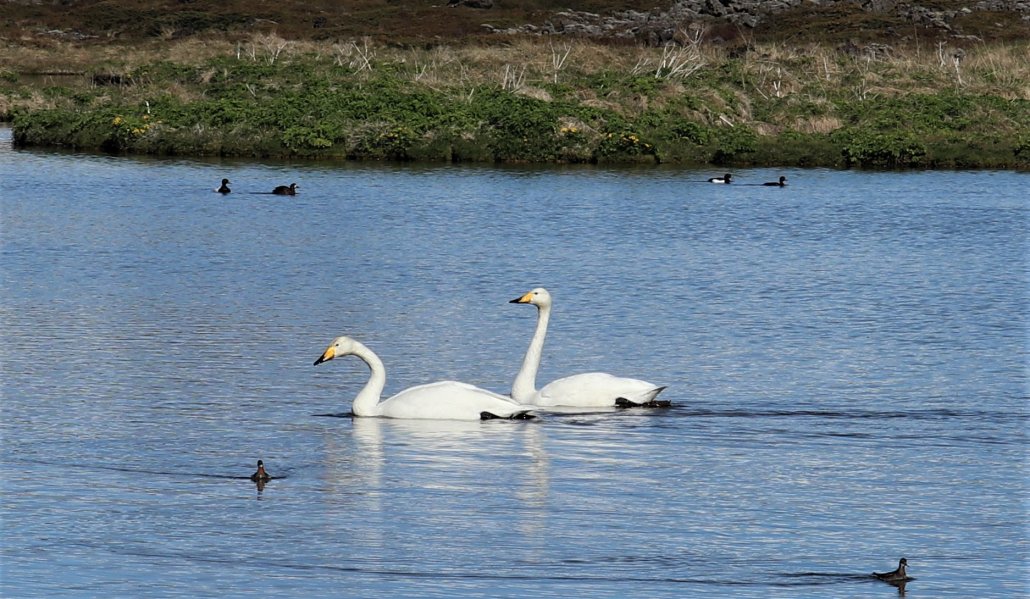 In a public discussion, whooper swans are suggested as a reason for the negative trends of other waterfowl. The perception that large waterfowl are harmful to smaller waterfowl has management and conservation implications, since these perceptions might affect hunters’ attitudes and social norms.

We used data from the national Finnish waterbird surveys collected in the late 1980s and early 2020s at 942 sites, to assess the site-level effects of large herbivore occurrence on other waterbird species, while considering their trophic overlap. We hypothesised that there could be competitive effects of large herbivores on smaller species, especially those with similar foraging niches.

We however not only found that the overall abundances of all foraging guilds (surface feeders, invertivore diving ducks, piscivores) were positively associated with whooper swan presence at sites, but also that the numbers of surface feeders and diving ducks, were positively associated with whooper swan colonisation. Thus, their populations have decreased less at sites occupied by whooper swans since the 1980s.

The whooper swan may potentially act as an indicator of habitat quality and further on as a flagship umbrella species with multidisciplinary conservation benefits, of which may accrue benefits also to other waterbirds exhibiting declining population trends. Our findings underline the importance of considering species interactions when designing and implementing management actions in conservation strategies.

The study has been accepted by Global Ecology and Conservation. The full text can be found here.

We wish to thank all the volunteer bird counters for their valuable work over three decades. The project was funded by the Ministry of Agriculture and Forestry. Academy of Finland provided funding for and Kone Foundation for SH.