A species action plan for the NW European population of Bewick’s Swan, developed to address the 27% decline in numbers between 1995 and 2005, was adopted by the African-Eurasian Waterbird Agreement (AEWA) in 2012.

The Northwest European population of Bewick’s Swan Cygnus columbianus bewickii is of conservation concern because its numbers are in decline. There was an increase in population size during the 1960s–1990s, but a coordinated international census in January 2005 recorded a total of c. 21,500 birds, a 27% decrease on the peak count of 29,277 made in January 1995 (Figure 1). 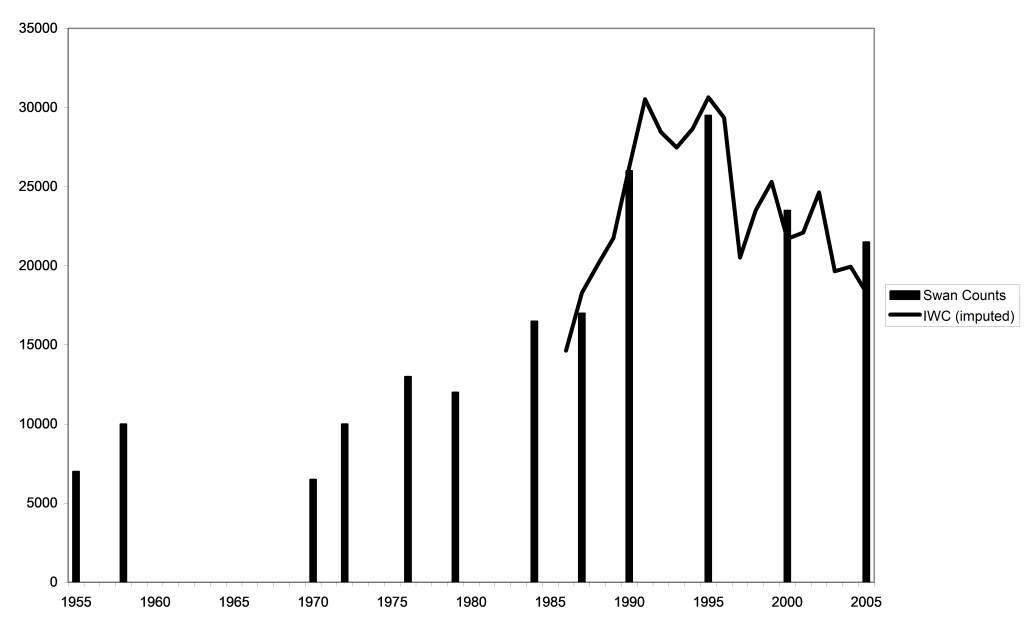 In September 2009, 30 Bewick’s Swan experts therefore gathered at a planning workshop in Saint Petersburg, hosted by Lenobl Priroda (a fund for supporting nature conservation in the Leningrad region), and organised jointly by Wetlands International (WI), the WI-IUCN SSC Swan Specialist Group and WWT (Figure 2). Participants identified major threats to the swans and developed a plan for the monitoring, research and conservation work required to halt and reverse the population decline. 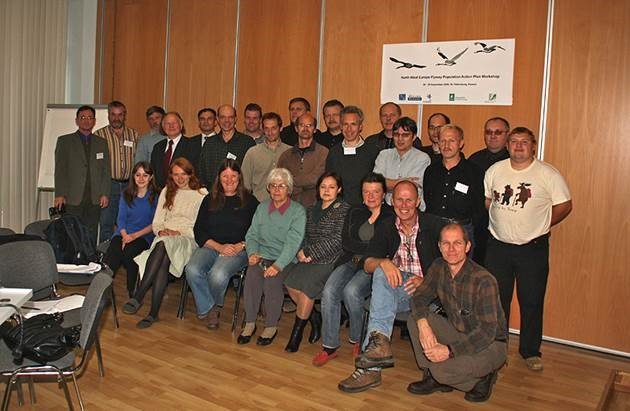 The overall purpose of the plan is, in the long term, to maintain a minimum population of 23,000, its level in 2000. It was evident that no single issue could explain the decrease in numbers since the mid-1990s and that a combination of factors, such as weather and habitat changes, that affect the swans’ survival and productivity should be examined in further detail.

Risks identified included habitat change, accidental/illegal shooting, oil pollution and disease. The importance of sustaining a chain of key sites sufficient to support the population throughout its annual cycle, together with the introduction of measures to reduce such risks, were identified as conservation priorities. Site management and protection, raising awareness about the swans’ protected status, and the development of emergency plans to reduce mass mortality from oil spills, were included as actions to address these issues.

The draft action plan was amended in line with comments received after consultation with governments within the swans’ range. It was adopted at the Meeting of Parties (MOP) of the AfricaN-EurasiaN Migratory Waterbird Agreement (AEWA) in May 2012, WWT was appointed by AEWA to host the Coordinator of the Bewick’s Swan Expert Group (BSEG) to take forward implementation of the Action Plan, and the first meeting of the BSEG took place during the 5th International Swan Symposium held in Easton, Maryland, USA from 3–6 February 2014. Conservation effort to implement the Action Plan is now underway, to continue until 2022, after which the status of the population and the need for further action will be reviewed.